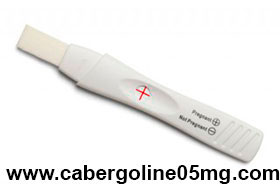 Cases of abortion or congenital malformations have been reported following the intake of cabergoline by the pregnant woman.

Before the beginning of treatment with cabergoline, the presence of a pregnancy must be excluded. Furthermore, it is necessary to take precautions – by both sexes – to avoid the onset of pregnancies both during the treatment and at the end of it, for a period of at least one month.

Therefore, treatment with cabergoline during pregnancy should be avoided, except in the case where the doctor does not consider it essential.

Cabergoline should not be used by breastfeeding mothers.

In certain patients with elevated prolactin, Dostinex is used to help keep the pregnancy. As explained by this source, there are clinical cases where the benefits of timely received treatment of prolactinoma should be prioritized during pregnancy for a number of medical reasons. The high prolactin, in fact, gives non-ovulatory cycles and therefore reduces the chances of conception, for this it must be corrected. 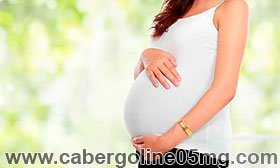 Cabergoline, the active ingredient of Dostinex, does not cause fetal harm but when it becomes pregnant it will have to suspend therapy because in pregnancy it is physiological that the value of prolactin rises.

The data made available as a result of 12 year study of Dostinex use in pregnant subset of female patients suggests that early termination of cabergoline therapy is indicated. A survey of 256 pregnancies showed that in 6.6% of cases self-abortions and fetal malformations were observed as a result of Dostinex treatment received by mothers. Neonatal abnormalities ranged from minor to major, with the most common malformation at birth pertaining to musculoskeletal structures. The next prevailing cluster of abnormalities observed in newborns from the controlled group was cardiopulmonary deviations.

The data on perinatal development anomalies associated with the use of Dostinex is very limited, but suggests a link between the use of Dostinex during pregnancy and neonatal malformations of varied severity (reported in 6.9% of cases, according to this study).

Pregnancy should be ruled out before cabergoline administration and pregnancy avoided for at least one month after stopping treatment. 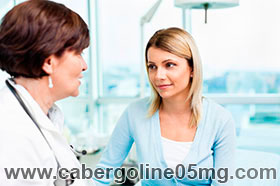 Taking into account the significantly prolonged half-life of the drug (it takes between 79 and 115 hours for the drug to be excreted from the blood plasma of patients with elevated levels of prolactin), it is recommended to discontinue the use of Dostinex once the desired therapeutic effect (menorrhea restoration) has been achieved at least 4 weeks before the attempts to become pregnant. Discontinuation of Dostinex therapy course will not compromise the patient’s ability to conceive a child, since the effects of the treatment (ovulatory cycles) are preserved for the average of half a year. It is essentially important to disrupt the course, thus minimizing any potential risk of fetal exposure to Dostinex effects.

In animal studies, cabergoline and / or its metabolites are excreted in the milk. There is no research data giving a clear understanding of cabergoline infiltration into breast milk in women, however if cabergoline does not inhibit lactation, breastfeeding is not recommended. Cabergoline should not be given to women with hyperprolactinemic disorders who wish to breastfeed as it inhibits lactation.